Their duo collaboration draws together flamenco and traditional Spanish and Latin American song, creating a unique sound which is as at home in a wide variety of venues – from intimate concert halls to large rock venues, and everything in between.

The partnership was forged on the road in 2009, two men alone with the elements. London-born both and friends since childhood, their paths had led one to Paris in pursuit of the French Baroque and the other to Seville to study flamenco. Inspired by one another’s explorations, a musical and personal reunion brought them together on the open road, where they sang, played, walked and talked and drew audiences on a daily basis for five weeks, carrying little more than their music. The result was the genesis of the current Poniente sound, and a repertoire which is ever evolving, yet always given life by the liberty and warmth of that voyage.

Outside of Poniente, their individual careers continue independently as singer and guitarist, one predominantly in the classical, the other in the flamenco world. Together nothing of either musical personality is compromised, and a sound arises which is much more than the sum of its parts. 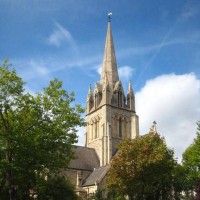